1. Basic summary of the data set.

In order to calculate summary statistics for the data set, I used numpy library. The results are as follows:

2. Exploratory visualization of the dataset.

First of all, I decided to plot some random traffic signs from the train data set. To do that, I generated random indices, retreived 25 corresponding images and then plotted them. Visualization can be seen below. The first thing that caught my attention was that lighting conditions under which the photos were taken can vary quite drastically. Some of the photos are really hard to tell apart because the lighting was so dark. I consider this can be a challenge for a neural network. 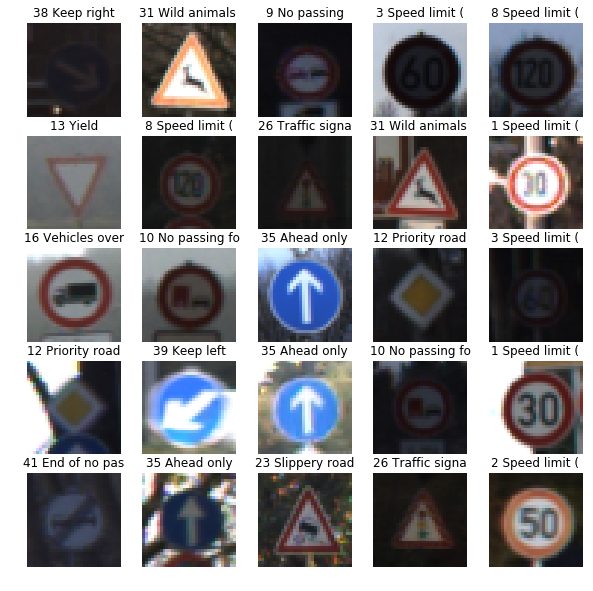 Another part that is really important for any classification task is the possible problem of class imbalance. In order to see whether this problem exists for this task, I decided to plot a simple histogram showing the number of training examples for each class. The result can be seen below. 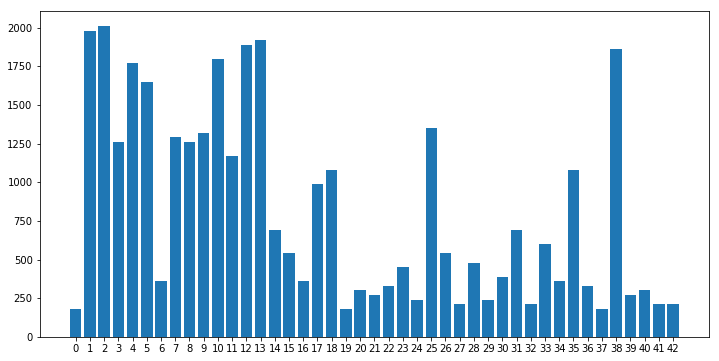 HIstogram of the 43 classes of traffic signs. Note that classes are imbalanced.

Design and Test a Model Architecture

The first step that I took in data preprocessing was normalizing all the pictures by substracting mean value and dividing by the standard deviation of the mean value. This normalization was performed for each of 3 of the color channels. This approach was inspired by the famous VGG19 paper that won prestigious ImageNet competition in 2014. I normalized all train, validation and test data sets using this approach. An important consideration was data leakage, so the mean and SD values used for all normalization were calculated only based on the training data set, and not validation or test data.

The next two steps were class balancing and data augmentation using 3 types of transformation: rotation, translation and shear. I used CV2 package to do this. I decided that combining these two steps together makes sense, because simply copying images in under-represented classes might make the network memorize data instead of learning important internal representation of features. I played with different values of transformation parameters until I was satisfied with results. Resulting transformed images can be seen below. 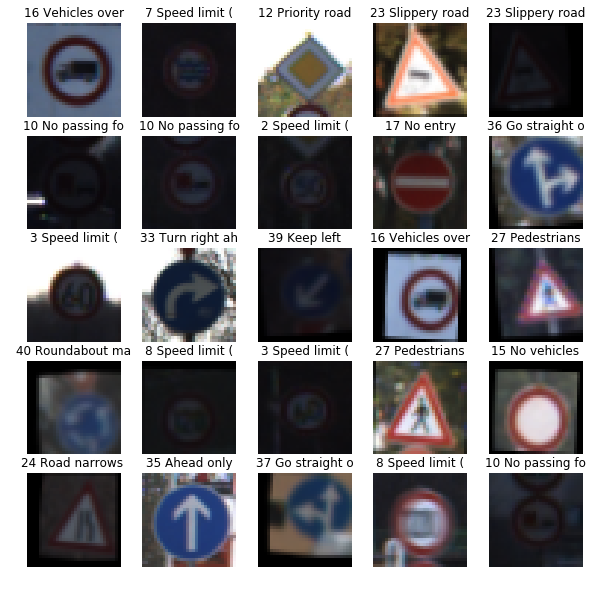 Random sample of 25 augmented traffic signs. I used rotation, translation and shear to increased variability of data during training.

After augmentation/balancing, each class has 2010 images, which is how many images the largest class had before augmentation. Histogram of post-augmentation class distribution follows below (it is quite boring in fact, due to all classes having same number of examples). 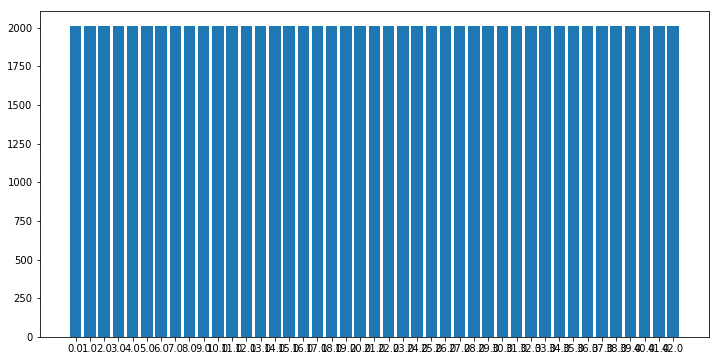 Histogram of dataset after random resampling with replacement was performed to make all classes equally represented.

My final model consisted of the following layers:

This architecture was originally inspired by the famous LeNet, but then modified during trial-and-error and also studying other architectures.

The first layer is quite interesting, in my opinion. It has 3 1x1 convolution channels. What this allows to do is for the network to learn “the best” color channel combination. I originally saw this in VGG19 paper, but then read online that many people use it. It turns out that original RGB color scheme sometimes is not the best for deep learning and we can make a network learn for itself what the most efficient combination of RGB channels. This can improve accuracy.

Apart from these 2 points, I do not think that anything else stands out about this architecture.

To train the model, I made the following decisions: 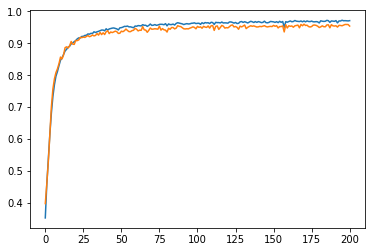 After training the model for 201 epochs, the final results were:

During this project, I have tried many architectures and encountered numerous challenges. Unfortunately, I did not keep a log of all approaches that I tried.

I started out with the LeNet architecture. Originally, I was choosing between LeNet and VGG16. I went with LeNet because VGG16 is used for a much more complex images including hundreds and thousands of classes and I thought it would be an overkill. In addition, transfer learning even for VGG16 can take quite some time and I did not have access to a very good GPU at that point in time. So LeNet was my choice because it was a simple architecture and training time would be shorter. Also I chose it because, in my opinion, both MNIST digits data set (originally used for LeNet) and traffic signs are similar in complexity in the sense that both are have very simple fatures that distinguish classes (as compared with distinguishing cats from dogs, which is much harder).

The LeNet did not work well for me. I started doing some reading about convnet architectures, and also had a look at what other students did for this project to get some inspiration.

I read about VGG19 that mentions 1x1 convolutions in the first layers and also saw other people use it, so I decided to give it a go. Then I also decided to increase complexity of the model and increased number of kernels in the first 3 convolutional layers to be 16-32-64.

This led to overfitting. Training accuracy was quickly going to 1.0, which means the network was simply “memorizing” the data and not learning. At the same time validation accuracy was stuck at around 88%, which is not enough.

I needed to regularize. I watched this amazing Tensorflow tutorial by Martin Görner. After that I knew that dropout was a good way to regularize. 0.5 dropout was too much, the model was not learning (or maybe it was, just way too slow), I reduced dropout to 0.35 (pkeep of 0.65) and got very good result, which still was below 0.93 needed for this project.

I played quite a bit with different parameters, witch very little effect until I decided to increase the number of neurons in fully connected layers tp 256 and 128, accourdingly. This is when my validation performance finally went over 93%, at which point I was really excited, especially after frustration times, when nothing really worked.

Finally, training, validation and test accuracy are all realtively close to each other, and all are higher than 0.93. This means that my model is working and can be expected to perform better than 93% on a relatively large data set of unseen images.

Test a Model on New Images

Here are six German traffic signs that I found on the web: 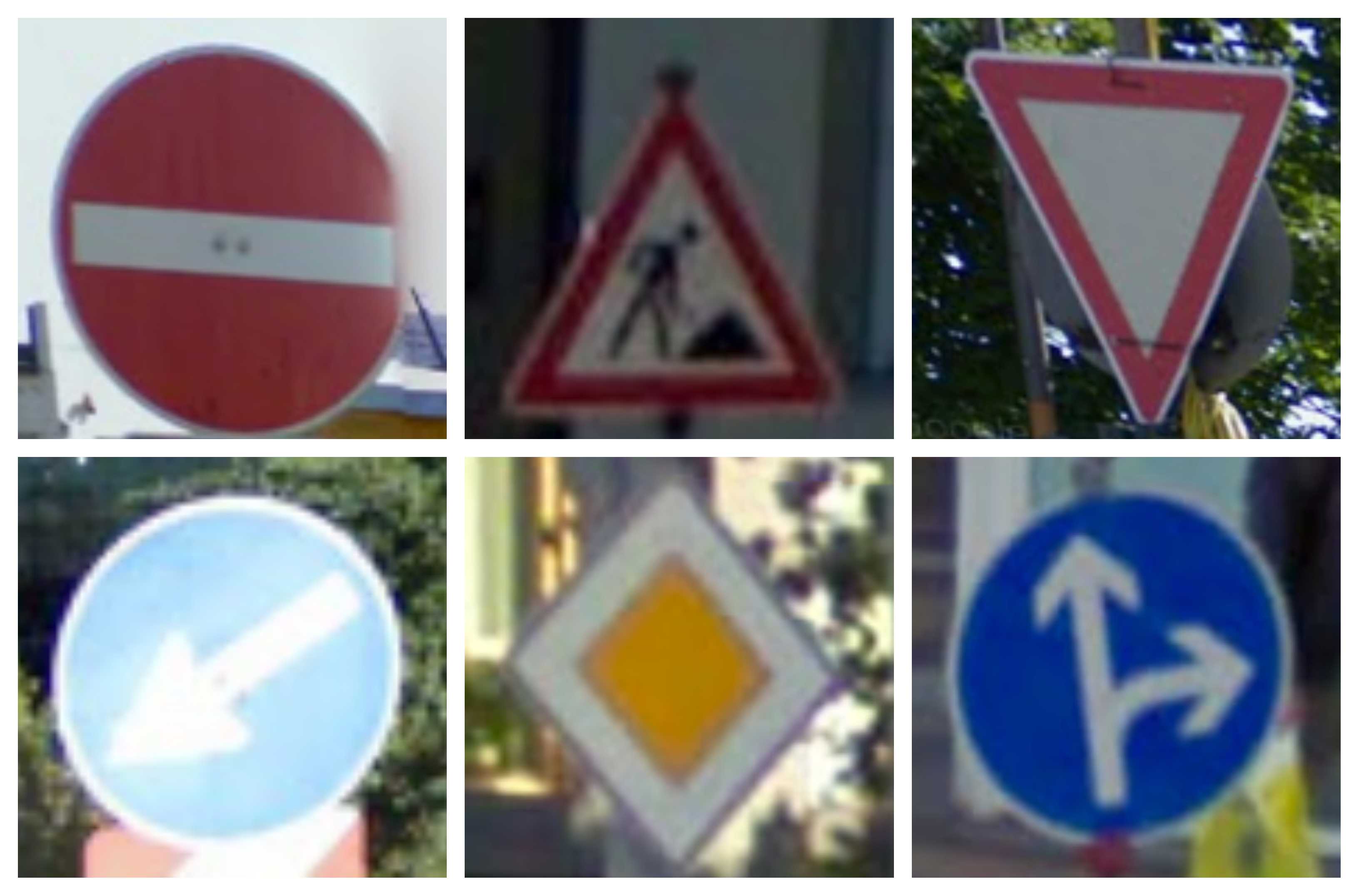 I cut them manually from Google maps, this is why they are all different sizes. When using them for predictions, I used CV2 to resize them to 32x32 pixels. It was not easy to find the signs. I entered street view on a random street in Berlin and spend around an hour collecting signs. I think I was not lucky and that area did not have too many signs.

All the signs photos look like they should not be a challenge for the model to classify. None of them were taken in low light conditions. Neither do they have significant distortions.

Here are the results of the prediction:

3. Softmax probabilities for all new signs.

The code for making predictions on my final model is located in the 62th cell of the Ipython notebook.

Results can be seen in the figure below. 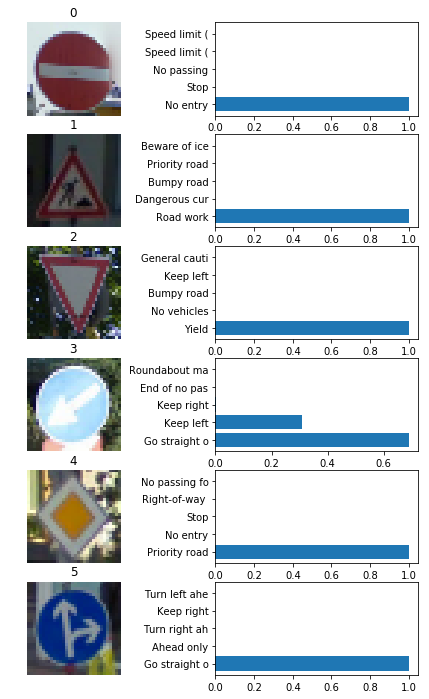 For 5 out of 6 images, the model is extremely confident in what it thinks the class of an image is. For all of those images, the predictions are correct. This is why I will not provide tables with probabilities for all the correct images. Precise numbers can be seen in the notebook after cell 74.

The only image for which the model is not confident, turns out to be the image where the model made a mistake. The model predicted it to be class 37 with probability of 68.9% (incorrect) and the second prediction 30.99% was for the correct class 39. By examining the photo we can see that the sign is too bright and this might have confused the model.