Why it is important

This architecture won the ImageNet competition in 2013, achieving the error rate of 14.8% (compared to 15.4% in the previous year).

As for using deconvolutions in upscaling, you perform deconvolution but learn new filters, so that convolutional filters from preceding layers don’t need to be reused.

Visualizations produced are reconstructed patterns from an input image coming from the validation set that cause high activations in a given feature map.

To produce input images that result in maximum activations, a separate Deconvnet is attached to the output of each layer whose features we want to visualize. Each Deconvnet itself is a neural network whose input is activations of a particular layer, and the output is an image depicting pixels that are responsible for maximum activation of a convolutional kernel of our interest for a given convolutional layer. In the paper, Deconvnet is described as a sequence of transposed convolutions, de-pooling and a special modified ReLU. The sequence of operations is the reverse of the steps that were used in the original neural network to produce a particular layer’s output. For example, let’s imagine we are interested in visualizing conv3 layer of some neural net. The computation below is performed to get to the output of the layer conv3:

Deconvnet attached to the output, will perform operations in reverse:

The output of the Deconvnet has the same dimensions as the input image in the convnet we are visualizing.

De-pooling operation (de-pool) is expanding dimensionality of data by remembering the pooled positions in the forward pass of the network we want to visualize.

Modified ReLU (relu*) only passes forward positive activation, this is equivalent to backpropagating only positive gradients, which is different from backpropagating through a regular ReLU. This is why the authors call it modified.

The paper is not very clear about why all these steps are necessary. After some research, I found another way to look at the Deconvnet: it is just a modified backpropagation step of the original convnet we are visualizing. Let’s get back to the example from above:

Now, backprop through a convolutional layer is just a deconvolution with the kernel rotated by 180 degrees (transposed convolution), so we have backprop conv = de-conv. Backprop through pooling is the same as de-pool as defined in the paper. Lastly, instead of using standard backpropagation through ReLU, the authors use modified ReLU, that only passes the positive activations. So, the backprop step now looks like this:

Examples of visualized features for layers 1 and 2. Note the size of activations projections and image patches are tiny for layer 1 and larger for layer 2. This has to do with different receptive fields of neurons in different layers. More on that below.

Examples of visualized features for layer3. Note the size of activations projections and image patches are somewhat small, but larger than in layers 1 and 2, and more complex.

The visualizations above are fascinating as they offer insights into the internal representation of knowledge learned by the network. It is essential to understand what precisely do they tell us. The images in the left side of the figures are projections from the highest activating neuron in a particular feature map to the pixel space of the input utilizing modified backpropagation outlined above. The images in the right side of the figure are parts of input images that produce a given projection on the left. In other words, visualization of activations is produced for each image separately.

In this toy example, each neuron in the first convolutional layer looks at a 3 by 3 pixels patch of the input image.

When you go to the next convolutional layer, each neuron looks look at a 5 by 5 pixels patch of the input image. Conclusion: the farther the layer is from the input, the larger the receptive field.

Now that you understand receptive fields recall that each convolution kernel slides across the input space and for each position it produces 1 activation. As a result, we have a 2D feature map for this kernel, consisting of numbers representing neuron activations. We can look and find the highest activation, and then we can trace back receptive fields through the network and find at which patch of the input image this particular highly activated neuron is looking. These patches are on the right side of the panel of each layer. 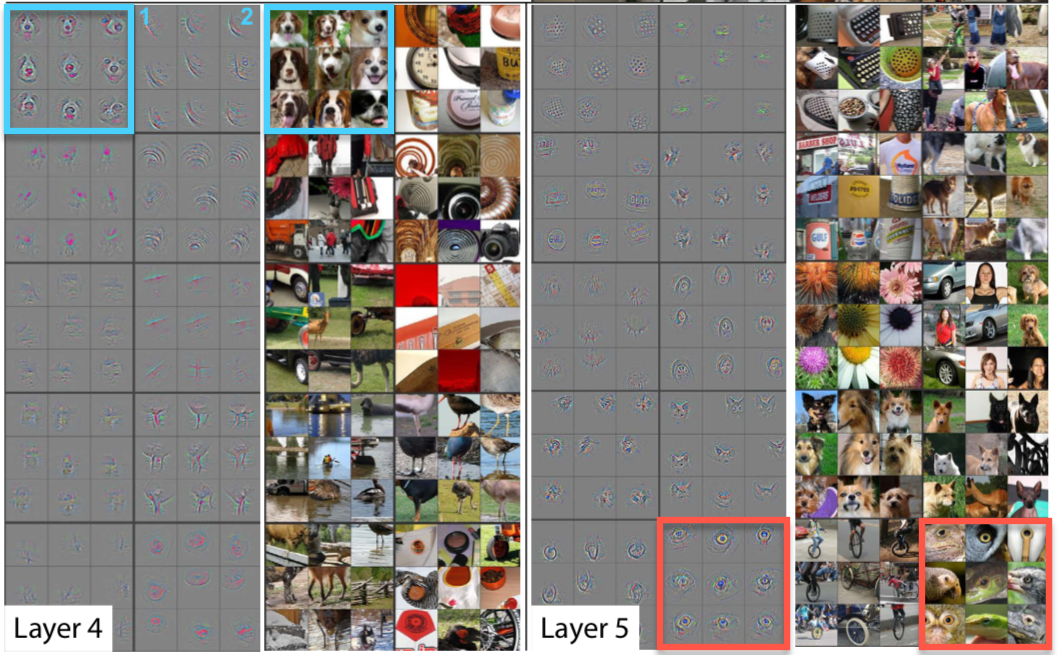 Examples of visualized features for layers 4 and 5. Note the size of activations projections and image patches are larger than those of layer 3. The complexity of detected entities is also higher than in previous layers.

Lastly, it is worth mentioning that the higher you go in the network (further away from the input), the more complex representations become. They increase complexity by combining more straightforward features from layers below. For example, if layer 2 detects circles, then layer 5 uses those detected circles when detecting god faces because dog eyes look like circles.

Overall, the architecture of the network is an optimized version of the last year’s winner - AlexNet (you can read the detailed review here). The authors spent some time to find out the bottlenecks of AlexNet and removing them, achieving superior performance.

In particular, they reduced filter size in the first convolutional layer from 11x11 to 7x7, which resulted in fewer dead features learned in the first layer (see the image below for an example of that). A dead feature is a situation where a convolutional kernel fails to learn any significant representation. Visually it looks like a monotonic single-color image, where all the values are close to each other.

In addition to changing the filter size, the authors of FZNet have doubled the number of filters in all convolutional layers and the number of neurons in the fully connected layers as compared to the AlexNet. In the AlexNet, there were 48-128-192-192-128-2048-2048 kernels/neurons, and in the ZFNet all these doubled to 96-256-384-384-256-4096-4096. This modification allowed the network to increase the complexity of internal representations and as a result, decrease the error rate from 15.4% for last year’s winner, to 14.8% to become the winner in 2013.

To summarize, it was not a revolutionary change, but rather evolutionary, building upon the ideas of the previous year’s winner.

Return to all architectures